THE STATE’S PLAN TO CONVERT THE SCAJAQUADA EXPRESSWAY INTO A DIFFERENT KIND OF ROAD IS NEARING COMPLETION.

The process began in 2005, languished for several years and then was jolted to the forefront when a car went off the road and struck and killed a child in Delaware Park. The last public hearing for the state Department of Transportation’s $100 million plan is being held Wednesday, and a decision is expected next year.

UPDATE: The state Department of Transportation has canceled Wednesday’s final  public hearing about the conversion of the Scajaquada Expressway, due to concern about the weather, and will reschedule the hearing in January.

The Scajaquada Corridor Coalition, which includes residents and nearby institutions, wants more than just a speed reduction on the Scajaquada Expressway. The state DOT feels its plan does that. The coalition doesn’t. The DOT plan covers the 2.2 miles between the Grant Street interchange and the Parkside Avenue intersection.

The state’s objectives are to slow traffic and enhance safety; accommodate vehicular, bicycle and pedestrian travel; connect both sections of Delaware Park, on either side of the road and between the park and adjacent neighborhoods; conserve the natural features of the site to the greatest extent possible; and address deficiencies, such as deteriorated pavement, antiquated and non-functioning drainage systems and inefficient street lighting.

“It’s been a long process to get to this plan, but in the end we respect and appreciate how passionate the community is about this, and we want to deliver a project that improves the safety and mobility for all of the users,” said DOT spokesman Gary Holmes.

Holmes said the DOT continues to pursue separate studies to evaluate areas approaching the park, including Main Street, but will not be part of this plan.

But community residents don’t feel they’ve been listened to, said Michael DeLuca, who chairs the traffic committee of the Parkside Community Association.

“[State DOT Commissioner] Mike Driscoll said a lot of community engagement would happen in 2016, but that didn’t happen in any meaningful way,” DeLuca said. “They checked all of their boxes, but they really haven’t heard us or responded to our concerns.”

What the community wants:

Many residents and institutions near the Scajaquada want changes. They say it falls far short of the state’s goals, whether it’s reductions in road width and larger buffer areas between the road and parkland to more at-grade crossings. They also want more sidewalks and bike paths.

“The DOT says the purpose of the plan is to eliminate expressway features from the corridor, and to create a new roadway in harmony with the surrounding land uses, and their plan fails to do that,” said Brian Dold, director of planning and advocacy for the Buffalo Olmsted Parks Conservancy. “Instead of making bold, transformational moves, they’re doing minor tweaks,” Dold said. “They’re just making a prettier version of what it already is.”

[The Buffalo You Should Know: The slow death of Humboldt Parkway in building the 33 & 198]

Justin Booth, executive director of GObike Buffalo, said the DOT listened to the public by adding more intersections, which will give people more opportunities to cross the road, and for cars to stop. But he said the size of the intersections was a problem.

“My number one concern is the size of the intersections,” Booth said. “It’s almost like putting Niagara Falls Boulevard and Maple Road in the middle of Delaware Park, and expecting people to be able to safely cross there.”

What the Scajaquada Corridor Coalition wants:

“We don’t want to look back in 20 years and say we didn’t go far enough,” Assemblyman Sean Ryan said.

“The new trend in urban infrastructure is taking out highways,” noting New York City, Rochester, Toronto, Milwaukee and San Francisco have done so.

Ryan said the Scajaquada should be like Ohio Street, which was converted into a successful parkway. 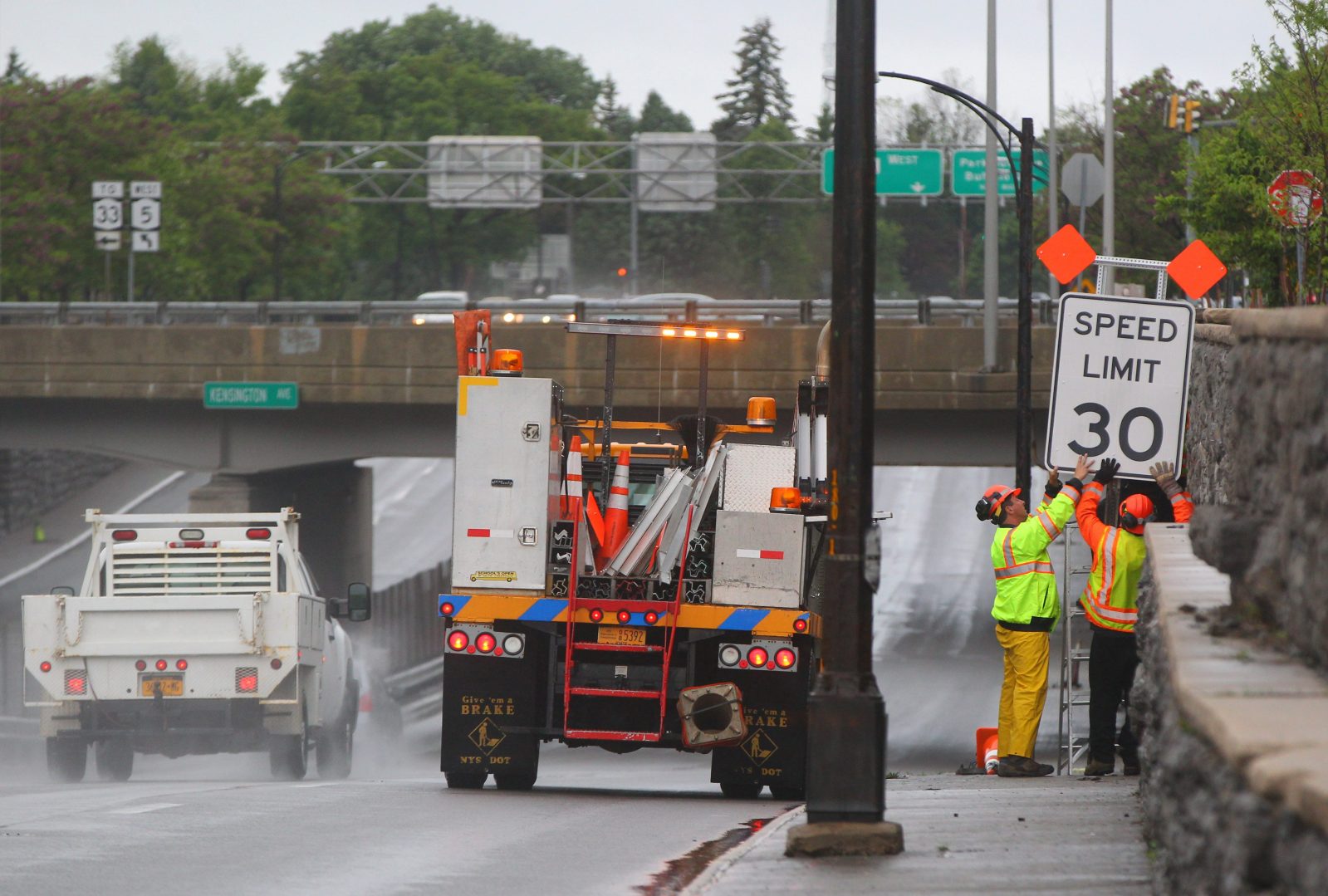 The Scajaquada Expressway, also known as Route 198, was planned in the 1950s and built in the mid-1960s with federal money to link interstates 90 and 190. But, like many of the urban renewal projects of that time, the road came with a steep price: segmented communities, ravaged creek shorelines and destroyed parkland.

Today, only about one-third of the vehicles travel from one end of the expressway to the other, according to the DOT.

In response to community concerns over safety, the DOT produced a plan for the Scajaquada Corridor in 2005 known as the Expanded Project Proposal. The preferred design, which received widespread community support, reduced the speed limit to 30 mph, improved the aesthetic of the road and incorporated crosswalks, roundabouts, narrower travel lanes, sidewalks and bicycle lanes.

But the DOT’s traffic engineers added new requirements that would maintain the expressway as a principal urban artery at the same level of vehicular use, which doomed the plan. The consultant who put the plan together wasn’t renewed. Many of those features proposed 11 years ago, and still favored by a large number of the community, are not in the current plan.

“It’s just frustrating,” DeLuca said. “I don’t know how many times you can attend meetings, and write letters, and they’ll say they’re looking into it, and the plan comes back the same.”

“What we are proposing here is very much in the spirit of that discussion that started in ‘05 and ramped up in ‘07,” Holmes said.

The lower speed limit is already paying dividends. There were 558 accidents during the three years between October 2011 and September 2014, according to a DOT study. Twenty-three accidents were recorded over the six months following the speed limit – a 76 percent drop.

Since the speed limit was lowered to 30 mph in May 2015, Buffalo police have issued an estimated 1,600 speeding tickets.

Department staff will be available beginning at 4:30 p.m. to discuss the project and answer questions. Written comments will be accepted through Jan. 25, 2017 at the office of the Regional Director, NYSDOT, 100 Seneca St., Buffalo, NY 14203.

All comments will be responded to in the final Environmental Impact Statement, which will be submitted to the Federal Highway Administration for approval.