THE BUFFALO OLMSTED PARKS CONSERVANCY, ALONG WITH ITS PARTNERS,

is ramping up its effort to convince the New York State Department of Transportation’s to halt its plan for redeveloping Route 198 in Delaware Park and come up with a better solution.

The New York State DOT is currently developing a plan that would see Route 198 become an urban boulevard with two lanes in each direction, separated by a median. Tentative plans include raised crossings for pedestrians and bicycles and a travel circle. The speed limit would remain at 30 miles per hour, as it has been since mid 2015, following the death of a child who was struck by a vehicle that left the roadway at a time when the speed limit was 50 miles per hour. 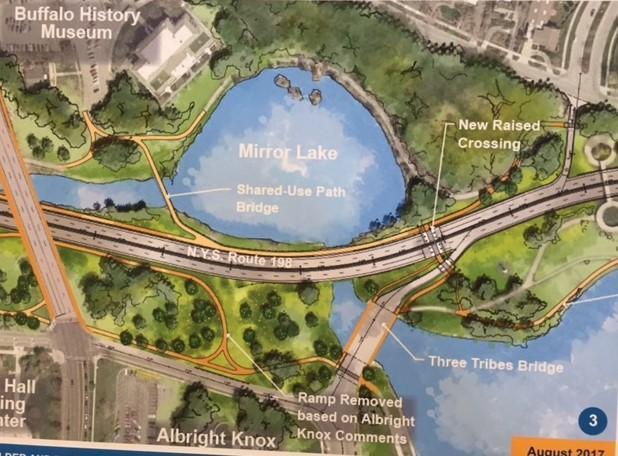 A rendering of Route 198 with proposed changes under consideration by the New York State Department of Transportation. CREDIT WBFO FILE PHOTO/MIKE DESMOND

Many think the state’s plan perpetuates what they believe was a mistake that began when the route was first constructed in the 1960s.

“Delaware Park has gotten a lot of press because there’s a roadway through the park but it’s also a roadway that has divided and destroyed communities,” said Brian Dold, Director of Planning and Advocacy for the Buffalo Olmsted Parks Conservancy. “For example, Humboldt Parkway from Parkside all the way to Delavan was destroyed by the Scajaquada Expressway construction.”

Dold and his peers at the Conservancy find the state’s current strategy for rebuilding Route 198 to be short-sighted. Through their #SaveDelawareParkcampaign, which was launched in partnership with the Scajaquada Corridor Coalition and Reclaim Our Community Coalition, aims to build grassroots support for convincing the DOT to hold off on its current direction.

Earlier this year, the Conservancy and other not-for-profit agencies introduced their own plan for redeveloping Route 198 around the park. Their version, they believe, unites both sides of the park by creating easier, safer crossings for pedestrians and bicyclists.

“They (the DOT) did have a public meeting following that release and they made several claims about it, having challenges, traffic congestion and these sort of things,” Dold said. “We’re really focused on looking at it comprehensively, not just a little proposal for one intersection. That is one idea, but it’s one of many. It’s really more about reuniting the park.”

Dold says a discussion on redevelopment of the Scajaquada Expressway will be hosted in the Student Center at Canisius College, Wednesday, November 8 beginning at 6:30 p.m.

A rally is also planned for December 18 in Delaware Park, according to Dold, but details were not yet finalized.